Merlin’s Apprentice aka Steve Birch is one of the most respected and prolific producers in the British underground scene. His passion for music caught fire in the early ’90s when he attended his first rave at the age of 13. It inspired him to buy turntables and he was soon playing regularly at local gatherings. After a few years, he came across some simple tracker software and was inspired to create his own music. After some soul-searching, he sold his beloved decks to pay for the first kit in his home studio. He spent much of the next seven years cooped up, perfecting his sound, not knowing if his hard work was ever going to pay off.
In 2003, Steve sent a new track, ‘Spaced Out’, to his favourite record label. He was promptly signed by legend John 00 Fleming for the now hugely influential J00F Recordings. ‘Spaced Out’ proved to be an absolute monster and Steve has never looked back. Since then, he’s released a huge variety of creative, intelligent and, often, commercially successful tracks and albums across multiple genres, both as Steve Birch (including 2014’s ‘Time Travellers’), or as one of his alter-egos: Merlin’s Apprentice (‘Star Children’, 2015) and ‘Lucid Dreamer’. Both ‘Time Travellers’ and ‘Star Children’ made it into the Top 10, as have many of his singles and EPs. He’s also played on many radio and tv stations worldwide, including BBC’s radio 1 and kiss FM.
Citing Hallucinogen as his all-time favourite producer, Steve’s music is a magical blend of the full-on psychedelic and euphoric elements of trance. He prides himself on creating his own original sounds, which continue to set him apart from the crowd. As well as being an in-house stalwart for Brighton-based J00F, Birch has been a great brand ambassador, with signings to some of the biggest labels around the globe, including Ovnimoon, Geomagnetic, Deep Blue and Goa Records.
Steve has always continued to play for the rave scene in forests and on beaches up and down the south coast (including the now infamous parties at Spitbank Fort) but his success in the studio also garnered prestigious gigs for the likes of J00F Editions, alongside more underground promotions such as Pulse and Cybertech. He’s also played regularly on the festival circuit across the UK, including the Three Wishes Faerie Festival, which he has likened to playing in a real-life Narnia! More recently, he’s played at London’s Futurity, dance:love:hub and Infinite Dreams NYE 2015/16 in Amsterdam, Tribal Village’s Dancelovehub room, the Psychedelic wedding dance off, Escape the Soul, Jerk Jam, Lovelution (Portugal), Freekquency(Portugal), Psybase and more. His energetic and uplifting style always gets the dance floor rocking and, whether he’s playing progressive or full-on psy, his sets always contain deep, melodic elements and a sense of progression that transport the listener away.
2017 saw the release of Steve’s incredible ‘Wonderland’ album on JOOF Recordings. Reaching no.2 in the charts 4 days after its release, it was held off the no.1 spot by psy trance legends Infected Mushroom for 3 weeks. Steve’s other alias, Merlin’s Apprentice, released a new album ‘The Space Between Us’, on cd via Geomagenetic records, featuring some stunning tracks to listen to at home, along with some dancefloor psy monsters.
Steve has a new 4 track EP ‘Dream Machine’ coming out on JOOF Recordings very soon, as well as brand new Merlin’s Apprentice full-on tunes, including a remix for Free-Spirit Records’ Journey. He’s been busy in the studio perfecting these tunes so they’re ready to blast on the dancefloor over the coming months.
Music and Facebook-
https://soundcloud.com/steve-birch-spacedout-rec
https://www.facebook.com/steve.s.birch.5
https://www.facebook.com/merlinsapprenticepsy/ 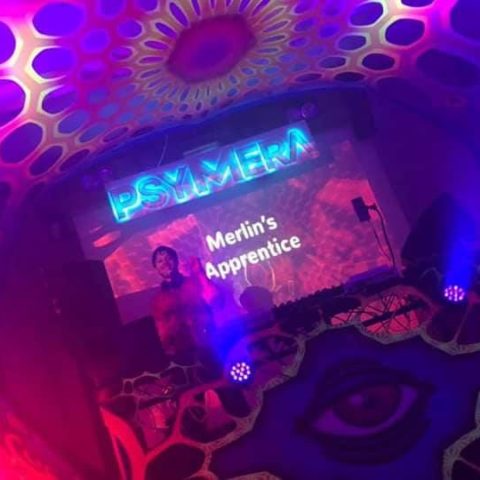